Moments That Defined New Media in the 2010's

From the rise of influencers and streaming culture to the amassment of radical movements, a lot has happened in the past decade. As we reflect and pay homage to the 2010s, let’s look back on moments that revolutionized how we consume, engage and interact with content across new distribution channels.

While the birth of iPhone and Android happened in 2007 and 2008 respectively, smartphones didn’t start touting success among consumers until 2010.  Apple’s iPhone sales began to shift tremendously in 2010, selling over 10 million in the year’s third quarter alone.

From then to now, smartphones are practically our lifelines, and the first place we go to when we want to consume some kind of information. Because of this rise, it forced media brands (from networks to news conglomerates) to ditch the single-channel mindset and think digital-first. From the New York Times to the Wall Street Journal, we saw big media giants hop on the digital bandwagon and release their own apps where audiences can consume news more conveniently and on-the-go.

But as time has passed, the competition to attract eyeballs has proved difficult.  This leads us to another big bang that transcended the media landscape. 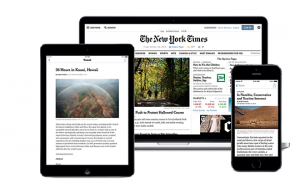 Just as the use of smartphones was taking flight, a new wave called ‘digital streaming’ was also taking shape and proving to give the cable business a run for its money. As the digital streaming pioneer and first-to-market disruptor, Netflix made its debut back in 2007 but changed the game in 2012 by producing its own exclusive content. It’s during this time where we saw a lot of ‘cutting the cable cord’ from consumers, and this hit especially hard for news networks.

Fast-forward to now, there’s been a huge uptick of big media companies like Disney, Time Warner and Comcast vying for audiences through the streaming subscription business. It will be telling to see how audiences will react to digital streaming in the decade ahead, and whether the influx will lead to digital fatigue.

Speaking of digital fatigue, it’s difficult to ignore the birth of a community that has transformed media forever: influencers.

Influencers enter and change the media game as we know it.

In late 2010, the phrase ‘a photo is worth a thousand words’ took on a whole new meaning when Instagram officially launched. At the time, users were able to simply upload photos maybe captioned with a clever saying and hashtags. Because it was a visual-first platform, it has led the culture of memes, selfies and influencers. From the onset of the decade to now, influencers have been plagued the frontrunners of today’s digital media landscape, cited for transforming the way brands interact with audiences.  But as we enter into the new decade, consumers are beginning to lose trust in influencers, forcing brands (especially those that are digital-first) to rethink and tap into more authentic ways to engage with audiences.

Taking a trip down the ‘2010 memory’ lane, one thing is for certain: disruption has defined us as a ‘digital-first’ society. With disruption being the new norm, it begs the question, ‘what will digital brands prioritize to excite existing audiences and attract new ones?’ Leave your thoughts below.