Popeyes and the Power of Virality

It seems every few months or so we see the same story play out in the media over and over. A random phenomenon occurs and takes  social media by storm. Hundreds of thousands of tweets and posts are shared, some serious and some of a more humorous nature. This buzz soon spreads to the mainstream media and before you know it, this phenomenon has gone viral.

Some of these trends like the ALS Ice Bucket Challenge have benefitted the public good, while others like the recent Tide Pod Challenge leave you speechless and led to a dangerous situation for a global brand. Yet, none of these viral trends have turned social media buzz into significant revenue like the recent Popeyes Chicken Sandwich announcement.

Yes, a three ingredient chicken sandwich has taken the internet by storm and catapulted a forgotten QSR brand to the upper echelon of viral glory. What’s interesting is not only the jaw dropping value that Popeyes received from their viral success, but also the root of this phenomenon. Let’s take a look.

They Didn’t Invent Chicken or the Chicken Sandwich

No, Popeyes was not the inventor of chicken and thanks to their fine competitor, Chick-Fil-A, they didn’t  invent the chicken sandwich either. Yet, the fried chicken brand has simply risen the ranks of the chicken sandwich hierarchy in days; something the minds behind Wendy’s and McDonalds have been trying to achieve for decades. This buzz was not due to a celebrity endorsement or a high powered marketing campaign, but rather a simple tweet and the power of virality.

Popeyes launched its new product with a harmless, clever tweet and a beautifully staged picture of its golden chicken sandwich.

Then, as typical nature for a fast food chain, Chick-fil-A replied with a subtle jab claiming their recipe as the “original” chicken sandwich. 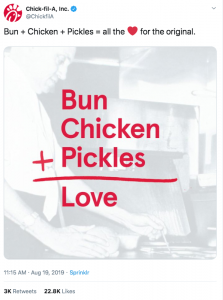 If you are like me, you are probably wondering what the big deal is. Companies trade barbs on social media every day. However, this instance was the perfect storm of great timing and a calculated risk. The back and forth struck a chord with the social media world. Soon rival brands like Wendy’s jumped into the fray and before you knew it, the phrase “Chicken Wars” had entered the lexicon. Tweets poured in by the boat load and Popeyes was quickly the number one trending item.

The most astonishing part of this whole dust-up is how quickly Popeyes was able to capitalize on its viral fame. Hour-long lines surrounded Popeyes across the nation, and many restaurants reported selling out of sandwiches within hours of opening. Restaurant traffic spiked to 103.3% nationwide as a result of the trend. While Popeyes executives were hoping for a strong kick-off to the new menu item, this result was beyond their wildest dreams.

The viral explosion for the sandwich led to a break-taking $23.25 million in ad value equivalencies for Popeyes in media mentions across digital print, social, TV and radio. The root of this media surge may be with Popeyes main competitor, Chick-fil-A. If the brand chose not to engage with Popeyes, who knows if the new sandwich would have taken off. Yet, the true heroes lie behind the keyboard. The hundreds of thousands of tweets and mentions from online users drove consumers in packs to the restaurant chain’s locations and kept Popeyes as a focal point of the news cycle. Not too shabby for a $3.99 sandwich.

Time will tell if Popeyes is able to see sustained success from the viral stunt, but the brand has to be pleased with its product launch. What will be interesting is how this phenomenon impacts the marketing landscape. Will more brands invest in organic social media rather than traditional TV and search ads? Who knows, but what is clear, is that the digital world connects with unique brand voices. Those like Popeyes that aren’t afraid to “Go There” and take risks will see major returns, while companies who aim to play it safe are doomed to be forgotten.